Last year Reserve Bank governor Phillip Lowe said he wouldn’t increase interest rates until he saw signs of strong real wages growth.
Now he is telling workers that if they don’t accept real wage cuts, then their greed will be responsible for inflation.
No wonder Treasurer Jim Chalmers is not only keen to hold a review of the RBA, but also rejected the governor’s suggestion for how it should be run.
Even though inflation is running at 5.1 per cent, and is tipped to hit 7 per cent by the end of the year, Dr Lowe has said he wants to see wage increases that “start with a three” and that “if wage increases become common in the 4 and 5 per cent range … then it’s going to be harder to return inflation to 2½ per cent”.
To be clear, the RBA governor is saying that even though wages growth has been low for the past decade, and even though real wages fell by a record 2.7 per cent over the past year, he still thinks that further reductions in real wages this year are not just inevitable but desirable.
It’s hard to imagine a bigger, and more brutal, U-turn.
The rhetoric of a ‘wage-price spiral’ is hardwired into Australia’s debates about inflation, but the reality is we are currently in a price-profit spiral.
As prices surge faster than they have in decades, and wages fall, the share of gross domestic product (GDP) going to profits is at record highs. It has never been a better time to be a capitalist in Australia, but it is workers who are being asked to tighten their belts.
The price of gas for industry and petrol for cars is surging in Australia, but the cost of extracting it isn’t. High world prices are driving bumper profits for the fossil fuel industry.
The cost of building new houses is up due to COVID-related cost increases for building materials and in part due to a poorly designed housing stimulus package.
The cost of coffee is surging in cafes around Australia even though the costs of making it aren’t.
And, of course, the Morrison government’s decision to jack up the price of university degrees was another major driver of last year’s inflation. Again, it’s policy and profits that have fuelled the inflation we have seen to date.
Imagine if, instead of asking workers to tighten their belts, the RBA told Australian businesses to pull their heads in.
And imagine if we didn’t just introduce a windfall profits tax on the gas and coal industry, which is making bumper profits off the back of Putin’s brutal war, but used it to push down the cost of education or child care.
Australia has plenty of options for controlling inflation – if we want to look for them. 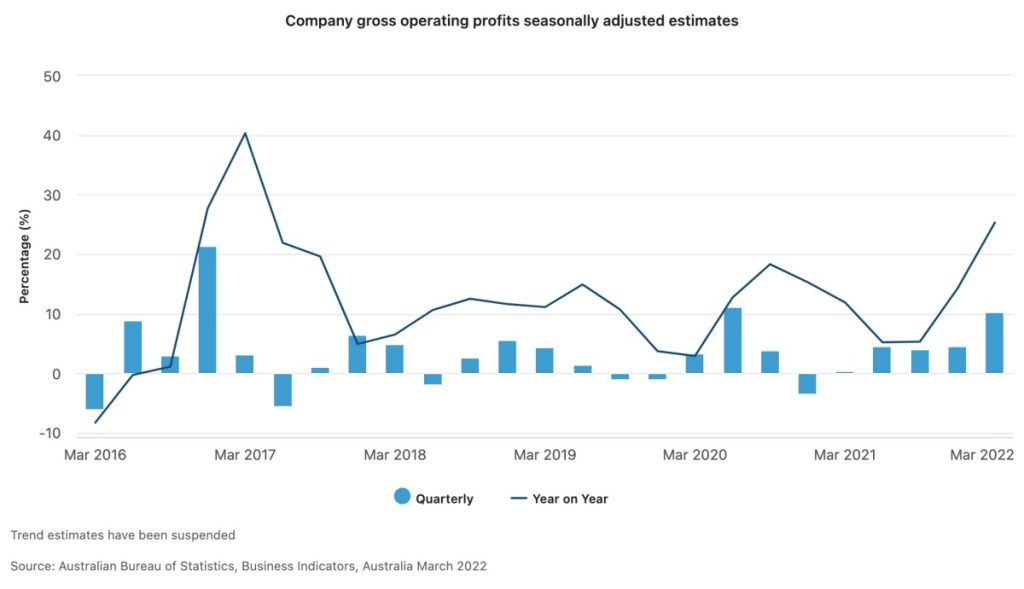 Imposing further real wage cuts on workers will definitely reduce business costs, but there is no guarantee it will lead to lower prices as firms may just continue to charge what ‘the market will bear’.
Does anyone really think that if workers in the gas industry take a pay cut Chevron and Santos will drop the price of gas? And does anyone think that Qantas’s savage cost cutting has led to cheaper airfares?
In theory, competition between different companies is so fierce that if one company tried to gouge its customers, a rival firm would cut their lunch. And in theory if one company kept increasing prices even when their workers’ wages were falling, rival firms would steal their market share. But in Australia, such theory is next to useless.
Our energy, retail, transport, grocery, banking and retail business are among the most concentrated and most profitable in the world. That’s why we talk about cafes so much.
It’s considered impolite to point out that profits are surging in Australia, and anyone who does so will be reminded how tough cafes and small businesses are doing it at the moment.
Leaving aside the fact that those living on $320 per week in unemployment benefits are doing it a lot tougher than the average cafe owner, the feelings of cafe owners is no counterargument to what the ABS data on profits is telling us.
Cafe owners now play a unique role in Australian capitalism.
Unlike the CEOs of banks, mining companies and airlines, cafe owners know our names, smile politely and bring us breakfast. Not only are they easy for journalists to interview about the state of the economy, they are hard for Australians to get angry at.
But whether we like our local cafe owner or not, real wage decline is not good for workers – it’s not good for the economy and it’s not a fair way to deal with the recent surge in the prices of energy and some imported components.
Just as making child care free during the pandemic pushed inflation down and lifting university fees last year pushed inflation up, there are lots of other ways that governments could intervene in the economy to improve the lives of people and push the price of living down.
The cost of medicine, child care, aged care, education, electricity, public housing, public transport and a wide range of other services are all directly influenced by state and federal government policies. If we wanted to control inflation we know how to do it.
It’s true that spending more money subsidising the cost of public services could lead to bigger budget deficits and possibly more inflation, but again, if we really wanted to solve that problem we have no shortage of policy options.
We could introduce a windfall profits tax on the gas industry, lift the super-profits tax already levied on the banks, and collect a lot more tax from multinationals like Google and Facebook that pay virtually no tax in Australia.
These policies would not only solve budgetary problems but also address inequality.
Cutting the wages of ordinary workers and lifting the interest rates paid by those with mortgages are the laziest and least equitable ways to lower inflation imaginable.
There are lots of other options available for those who are willing to look, and while it’s unlikely that the upcoming review of the RBA will be completed in time to protect millions of Australians from avoidable pain, let’s hope the backdrop in which the review is conducted at least motivates the creativity required to avoid such unnecessary pain in the future.
Richard Denniss is the chief economist at independent think tank The Australia Institute. He tweets @RDNS_TAI
Get The New Daily free every morning and evening.
Follow The New Daily
Copyright © 2022 The New Daily. All rights reserved.
Get The New Daily free every morning and evening.
There was an error submitting the form. Please try again.